As he does every year, Bill Gates has shared his reading list for this summer. This time around, he’s included more than his usual five picks and many of the recommendations have a connection to the ongoing pandemic.

Of The Choice by Edith Eva Eger, he says:

This book is partly a memoir and partly a guide to processing trauma. Eger was only sixteen years old when she and her family got sent to Auschwitz. After surviving unbelievable horrors, she moved to the United States and became a therapist. Her unique background gives her amazing insight, and I think many people will find comfort right now from her suggestions on how to handle difficult situations.

He also recommends The Great Influenza by John Barry, Good Economics for Hard Times by Abhijit Banerjee and Esther Duflo, and The Headspace Guide to Meditation and Mindfulness by Andy Puddicombe.

For years, I was a skeptic about meditation. Now I do it as often as I can — three times a week, if time allows. Andy’s book and the app he created, Headspace, are what made me a convert. Andy, a former Buddhist monk, offers lots of helpful metaphors to explain potentially tricky concepts in meditation. At a time when we all could use a few minutes to de-stress and re-focus each day, this is a great place to start.

Gates also recommended some TV shows and movies — Netflix’s Pandemic but also Ozark. He read Cloud Atlas recently — I wonder if he’s seen the movie by the Wachowskis (which is underrated IMO)?

emdot
reply
i don't know if i have it in me, but i'm saving this just in case.
San Luis Obispo, CA

“The scars you share become lighthouses for other people who are headed to the same rocks you hit.”
— Jon Acuff

As some places in the United States and other countries are opening back up (some very prematurely), immunologist and biologist Dr. Erin Bromage has written a practical guide to the known Covid-19 risks and how to avoid them that’s based on recent scientific research. He begins:

It seems many people are breathing some relief, and I’m not sure why. An epidemic curve has a relatively predictable upslope and once the peak is reached, the back slope can also be predicted. We have robust data from the outbreaks in China and Italy, that shows the backside of the mortality curve declines slowly, with deaths persisting for months. Assuming we have just crested in deaths at 70k, it is possible that we lose another 70,000 people over the next 6 weeks as we come off that peak. That’s what’s going to happen with a lockdown.

As states reopen, and we give the virus more fuel, all bets are off. I understand the reasons for reopening the economy, but I’ve said before, if you don’t solve the biology, the economy won’t recover.

But since things are opening up anyway (whether epidemiologists like it or not), Bromage goes through a number of scenarios you might potentially find yourself in over the next few months and what the associated risks might be. His guiding principle is that infection is caused by exposure to the virus over time — increase the time or the exposure and your risk goes up. For example, public bathrooms might give you a ton of exposure to the virus over a relatively short period of time:

Bathrooms have a lot of high touch surfaces, door handles, faucets, stall doors. So fomite transfer risk in this environment can be high. We still do not know whether a person releases infectious material in feces or just fragmented virus, but we do know that toilet flushing does aerosolize many droplets. Treat public bathrooms with extra caution (surface and air), until we know more about the risk.

But being in the same room with another person simply breathing may not carry a large risk if you limit the time.

A single breath releases 50-5000 droplets. Most of these droplets are low velocity and fall to the ground quickly. There are even fewer droplets released through nose-breathing. Importantly, due to the lack of exhalation force with a breath, viral particles from the lower respiratory areas are not expelled.

But that time would drop sharply if the person is speaking:

Speaking increases the release of respiratory droplets about 10 fold; ~200 copies of virus per minute. Again, assuming every virus is inhaled, it would take ~5 minutes of speaking face-to-face to receive the required dose.

Again, this is all indoors. Being in enclosed spaces with other humans, particularly if they are poorly ventilated, is going to hold higher risks for the foreseeable future.

The reason to highlight these different outbreaks is to show you the commonality of outbreaks of COVID-19. All these infection events were indoors, with people closely-spaced, with lots of talking, singing, or yelling. The main sources for infection are home, workplace, public transport, social gatherings, and restaurants. This accounts for 90% of all transmission events. In contrast, outbreaks spread from shopping appear to be responsible for a small percentage of traced infections. (Ref)

Importantly, of the countries performing contact tracing properly, only a single outbreak has been reported from an outdoor environment (less than 0.3% of traced infections). (ref)

The Michael Pollan version of advice for socializing during the pandemic might be: Spend time with people, not too much, mostly masked and outdoors.

digdoug
reply
Does humidity have an effect? Does a light rain help? Because it appears the sun has abandoned us.
Louisville, KY

emdot
reply
"The Michael Pollan version of advice for socializing during the pandemic might be: Spend time with people, not too much, mostly masked and outdoors."
San Luis Obispo, CA

Inside the Epicenter of the Pandemic Baking Boom at King Arthur Flour by Jason Kottke
Wednesday May 20th, 2020 at 1:27 PM 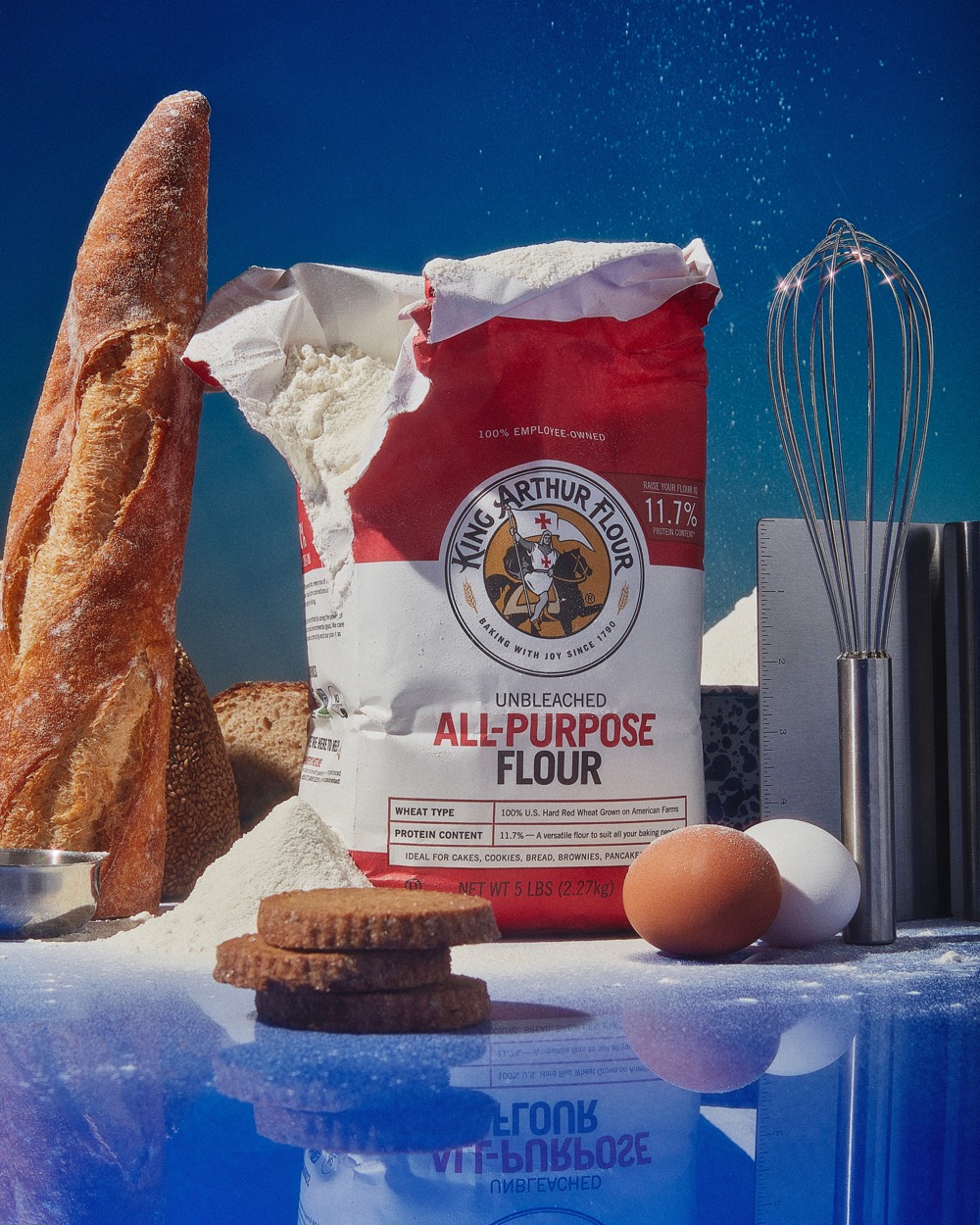 Marker’s David Freedman has a great look at how Vermont’s own King Arthur Flour has dealt with a massive increase in demand for their best-in-class flour and other challenges during the pandemic. The piece is a textbook example of what Tim Carmody calls the systemic sublime.

The company knew something weird was going on when they noticed a 600% sales jump almost overnight and started seeing different kinds of questions coming into their consumer call center.

So tricky and specific are some of the bread-baking questions that even though Ely is one of the bread specialists working the hotline, she sometimes puts callers on hold and yells over the cubicle walls to colleagues for second opinions.

But in early March, Ely noticed a change in the questions. Partly it was an increase in the sheer number of calls, a jump that seemed more sudden and pronounced than the normal mild pre-Easter build-up. But even stranger was how many of the callers seemed, well, clueless. How do you tell if bread is done? Do I really need yeast? And strangest of all: What can I use instead of flour?

In a matter of weeks, the employee-owned company transformed several aspects of their business and tripled their flour output in order to keep up with the demand.

As a first step to ramping up the flow of flour to consumers, King Arthur added one to two shifts at all its facilities and contracted with an additional fulfillment center. It shifted most of its long-distance product transportation from rail to trucks, which are more expensive per bag but add speed and flexibility. It stopped international sales to divert all incoming inventory to U.S. customers. To make shipping operations more efficient and get orders out the door faster, the company switched to all “ship-complete” shipping — that is, if one item in a multi-item order was temporarily out of stock, the entire order was held until the item was back in stock.

The company also managed to find a new partner that could mill and bag more flour. The wrinkle was that the partner was only set up to fill three-pound plastic bags, not King Arthur’s five- and 10-pound paper bags. So King Arthur quickly whipped up a new three-pound plastic bag and threw it up on the website as a new product. That move alone would add up to a half-million new units a month to the company’s shipments.

The company has also done right by their employee-owners:

Altogether, three-quarters of the company’s employees were sent home. In many cases, the work went with them, as was the case with the Baker’s Hotline, and with most managers. Many of those whose jobs couldn’t be performed at home were trained to help out with tasks that could. So far, not a single employee has been furloughed; everyone is being paid — including 12 employees who stay busy sewing masks for other employees.

They’ve helped out companies they supply as well:

While home baking was taking off, bakeries were being closed down, sharply reducing demand for the big bags of flour. (To help keep some of them afloat, the company has spent $30,000 so far during the pandemic paying some of its bakery customers around the country — including Empire Baking — to bake bread and donate it to local good causes. Its own bakers have been doing the same for essential workers and those in need in Norwich.)

And I love the photos that accompany the article by Stephanie Gonot — that must have been a fun & messy photoshoot to do at home. (via @robinsloan)

NIGHTLY QUESTION: what is the pettiest, silliest, most meaningless hill you are willing to die on

This thread made me laugh. And nod my head in agreement.

Daniel Radcliffe Reads the First Chapter of Harry Potter and the Sorcerer’s Stone by Jason Kottke
Tuesday May 5th, 2020 at 2:50 PM

As part of the Wizarding World’s Harry Potter at Home initiative, they’re having an all-star cast read the first book in the series aloud on video. The first chapter was just released and it’s read by none other than Daniel Radcliffe himself. You can also listen on Spotify:

A new chapter with a different reader will be released each week — readers of future chapters include Stephen Fry, Dakota Fanning, and Eddie Redmayne.